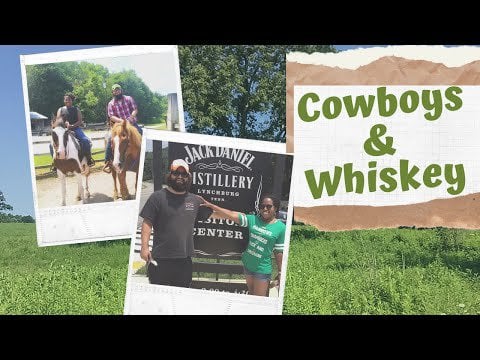 Hey fellow hikers! I did something different In this video! Usually we hike and explore the areas we go, but this time we hiked AND rode horses when we ventured to the Land Between the Lakes located in Kentucky and Tennessee between Lake Barkley and Kentucky Lake!!

The area was designated as a national recreation area in 1963 by President John F. Kennedy. This land is one of the largest blocks of undeveloped forest in the eastern United States. It has tons of trails, water, over 300 miles of natural shoreline, lake access provides idyllic settings for camping, picnicking, hiking, fishing, boating, wildlife viewing, and water sports! We chose to book a cabin on the ranch where we also rode our horses along the shore at sunset! The horses were trained really well because Tyler tried to take his horse off the path and his horse almost BUCKED him off! Our tour guide yelled at Tyler (rightfully so) and told him he would have to walk if he couldn’t stay on the trail. (That was hilarious and a great “I told you so” moment!).

The next day, we decided to visit Jack Daniel Distillery to take a tour and taste some whiskey. The tour was fun, but the tastings were more fun. It really isn’t much in the small town where this is located, so there was not a lot of sightseeing to do. We toured the museum, the house where Jack lived, the distillery and where the whiskey gets fermented. Very intricate process. The fumes from the whiskey were so strong that everyone that came in got a little light headed from inhaling them. It felt like we all took 5 shots of whiskey just by breathing the air. That is how potent the fumes were. We could taste the hickory, the honey, all the flavors from each batch being made.

For the actual tastings, I am the wrong person to ask about this because I don’t drink. So when the guide asked us what did each taste like, my scale was strong, stronger, and strongest! All of them tasted like MOONSHINE to me! The popular Jack Daniel’s No.7 even tasted like Moonshine! (my opinion). The only whiskey I could really TASTE and it tasted GOOD was the Tennessee Whiskey FIRE (tastes like red hot candies) and the Tennessee Whiskey Honey (tastes smokey, buttery, and sweet). This one tastes like a butterscotch candy somewhat. (Again I don’t drink so I don’t really know how to explain it to the actual Whiskey lovers other than something I have had in the past … like CANDY lol).

I hope you enjoyed my video! If you have ever been to the Land between the lakes or Jack Daniel’s Whiskey tours, drop a comment below! What is your favorite flavor of whiskey? Happy trails!

By the same author

From the same category

This error message is only visible to WordPress admins